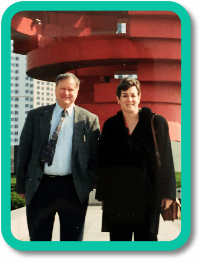 Their planning was informed by their experience with CEOS, the Committee on Earth Observations Satellites, which Lisa helped create in 1984, and which continues to this day. Initial membership in CEOS was governmental space agencies with Earth observing assets (spacecraft or instruments) in space or planned and funded. Other interested and related organizations were invited as observers. CEOS’s initial focus was on program planning – how to stimulate investments in the global observing network in a coordinated approach; and data management: access, intercalibration and validation. Over time CEOS expanded its work to encompass capacity building, education, and outreach.

CEOS is managed by a network of member agency personnel, led by a chairperson from whichever organization is hosting that year’s annual plenary meeting.  This system worked (CEOS still going strong after 36 years) because it was held together by the common international vision of space agencies. However, some key organizational issues were not attended to because no agency and executive director was in charge.  The ocean institutions we hoped to bring together were more diverse in structure and goals than space agencies, and we believed an independent secretariat would be able to take a lead in defining the new group’s organizational identity.

Creating POGO required consideration of many issues, starting with who should be at the table and what kind of governance structure to adopt.  We hoped that what would become POGO would be open to any institution capable of deploying and operating observational instrumentation on oceangoing cruises.  Thus the words Observation and Global Ocean entered the title. Unlike the coastal oceans, the Global Ocean is an international commons, and the absence of national authority made coordination of research programs challenging.   We ultimately envisioned an open consortium of national and private ocean research institutions represented at head-of-program level. It would make decisions by consensus.    Thus, the word Partnership was essential.  Lisa coined the acronym POGO and we had a catchy name that would stick in people’s memories.

The first practical challenge was to introduce the idea to the global oceanography community.  It did not ring true for a single institution to propose a partnership; it would be more credible if a partnership sponsored the partnership proposal.  So Charlie convinced his opposite number at Woods Hole Ocean Oceanographic Institution, Bob Gagosian, to join in taking the lead.   When Scripps and Woods Hole agreed on something, it was influential in the US.  But US institutions were not enough; the proposal sponsorship had to be international.  Charlie had had some early discussions with John Shepherd, the then director of the Southampton Oceanography Centre, about coordinating observations, and Charlie and Bob recruited John Shephard’s successor at Southampton, Howard Roe, to join the proposing team.   Still, although it had three big institutions from advanced western countries, the composition of the proposing team did not reflect the POGO vision of a broadly inclusive consortium.  To that end, Charlie, Bob, and Howard recruited Patricio Bernal, the executive director of the International Oceanographic Commission (IOC).  This group decided to hold POGO’s first meeting at IOC headquarters in Paris, which, since IOC was a UN organization, signalled our hopes for international inclusivity.

POGO’s first meeting in 1999 was devoted to vision and nuts and bolts.   Most every invitee was attracted by the vision or they would not have come to the meeting, which quickly got down to the nuts and bolts.  Why should busy Directors devote 3 or 4 days a year to POGO, why should the institutions pay international travel expenses and the dues for an independent secretariat?

The main question was, of course, what is the value proposition? One of the most important attractions of POGO would be the opportunity for senior oceanography leadership around the world to develop personal relationships, share best practices, and provide support to each other. At the institutional level, when advocating for resources, POGO members could show how each agency’s contribution leverages the resources of all the other organizations. Education and outreach materials could be shared to tell a coherent story about the value of a global observing network.  Among POGO’s unique functions would be to advocate Southern Hemisphere observations.  At the time, it was also important to be a forum for coordinating the deployment and operation of the international ARGO Float network; to that end, Dean Roemmich made important contributions to early POGO meetings.  Over time, POGO expanded its remit to include capacity building, and to allow consortia of smaller organizations to become members in pursuit of this goal.

It was a lot to think about at that first meeting. We had been prepared for the first meeting to be inconclusive, and we had the strategy of asking a private foundation to pay for the next three years’ meetings, after which dues would be required.   At this point, Jesse Ausubel, who had joined the proposal team, secured the private private funding for the three years; Ausubel was later invited to join POGO as an ex officio member. Ausubel’s funding, together with the eventual membership dues, enabled the hiring of POGO’s first full time executive director, Shubha Satyendrenath. POGO’s 2001 meeting was held in Sao Paolo, to signal POGO’s interest in Southern Hemisphere Issues. Governance presented a challenge because POGO members included government and non-governmental organizations, and a wide range of program planning and funding mechanisms.   It took the whole first three years’ meetings to figure out how to work together, but we did, and you are.