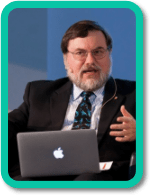 “A few weeks after I started at CSIRO in Hobart, we hosted POGO-4, which Nan Bray had arranged to bring to Tasmania.  Bushfires were raging in Hobart and also in Canberra… Read more…

I was lucky enough to meet many Directors who became my friends and my colleagues through to POGO-13 in Honolulu. They were happy years, full of joint achievements.

“At POGO-9 in Bermuda I was able to ask Michael Douglas to present a gift to my predecessor at Scripps and former POGO Chair Charlie Kennel.”